A Rhode Island Amazon delivery driver attached a pen camera to his shoe and wore women’s clothing and a blonde wig to secret film underage girls in a bathroom at a Massachusetts mall and was found with more than 200 videos of women and girls, an investigation revealed.

Jacob Guerrero, 23, of Woonsocket, Rhode Island, was arrested by Wrentham Police Department in Massachusetts after he dressed as a woman and entered a women’s restroom to take videos of underage girls.

The Wrentham Police Department received a call on August 24 from a customer at the Wrentham Village Premium Outlets about a man who appeared to be dressed as a woman and acting suspiciously in the public women’s restroom.

The unnamed woman reportedly photographed Guerrero hanging out near the bathrooms before following a group of young girls in, according to the Sun Chronicle.

Guerrero entered the women’s restroom wearing a blonde wig, gray and black sweatshirt, black pants, and sneakers, according to photos released by police. He is suspected of attaching a pen camera – an ‘easily concealed surveillance camera that have the ability to record video and photos on Micro SD cards contained within the pen’ – to his shoelaces. 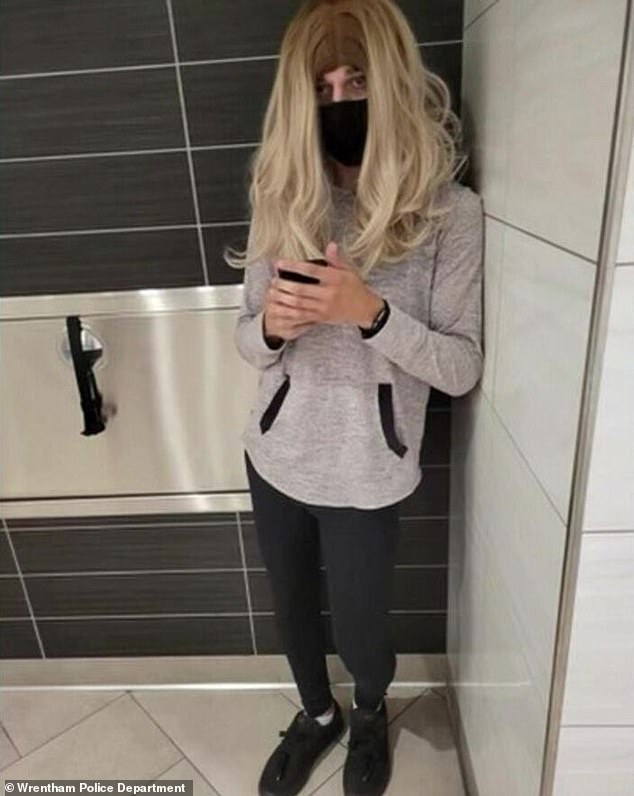 Guerrero (pictured dressed as a woman) was photographed by a female customer who noticed he was standing outside the Wrentham Village Premium Outlets women’s restroom before following a group of young girls inside. Dressed in black pants, a gray sweatshirt, and a blonde wig, he allegedly would sit in adjacent stalls to those of young girls and video them

He allegedly entered the women’s restroom several times between July 11 and August 24 after finishing his shift at Amazon, which has a parking lot adjacent to the outlets, according to the Sun Chronicle.

He ‘reportedly entered the Ladies Room and occupied stalls next to adjoining stalls that women and younger girls’ occupied, police said. The girls are believed to be between the ages of eight and 15.

The Wrentham Police Department revealed there were 12 victims at the mall and five of them were under the age of 18, some are estimated to be between eight and 11. 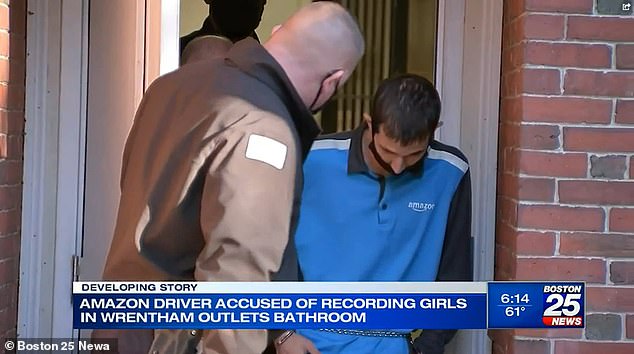 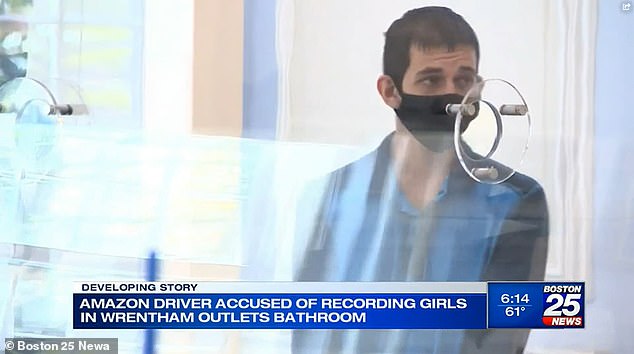 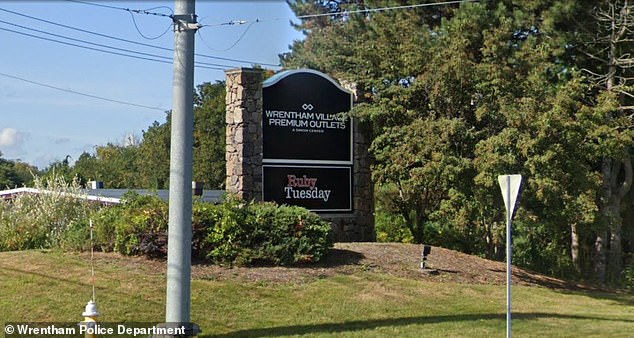 He allegedly did this on multiple occasion between July 11 and August 24 at the mall (pictured) after he got off work as an Amazon delivery driver. Amazon reportedly has a parking lot across from the mall. Amazon confirmed he no longer works for the company

Guerrero left the outlets before police arrived, but was identified by the woman’s photograph and mall surveillance cameras captured his license plate.

He was arrested on September 2 after a traffic stop and a warrant was obtained after an investigation, according to police. He was released.

The police later obtained an additional search warrant for his personal vehicle and cell phone.  Police found 240 videos and 23 images of women and girls on his phone, according to police.

‘That examination recovered approximately 240 photographs as well as 23 videos of individuals in a state of undress,’ Prosecutor Chris Cook said in court yesterday.

Among the footage, he was found taking a video of a 10-year-old in Norfolk, Massachusetts, who was changing into her pajamas in her bedroom on March 17, according to the Chronicle.

‘In at [least] one case, the evidence suggests the suspect secretly recorded a young girl through her bedroom window as she undressed,’ the police department wrote in a statement.

Guerrero was arraigned yesterday. He faces a mandatory minimum of 10 years in prison if convicted.

Amazon confirmed to Boston 25 that Guerrero is no longer an employee.

‘This individual is no longer delivering packages for Amazon and we’ll continue to assist law enforcement with their investigation,’ they told Boston 25.