The innovations that helped Inditex bounce back from the pandemic were years in the making but came to fruition just in time. For about a decade, the world’s biggest clothes retailer has been working to unify its online activities with its network of more than 6,000 stores across the world.

The Spain-based group completed a vital step in that process — which starts with hundreds of millions of tracking devices and ends with massive computing power — just before Covid-19 transformed commerce.

As a result, Inditex was able to sell stock from shuttered stores during the worst moments of the pandemic, to push inventories down and profits up in the aftermath of the crisis, and to intensify its drive to bring together in-person and online shopping.

“We’ve been working for years on this integration between the physical and the digital worlds,” Pablo Isla, Inditex’s executive chair, tells the Financial Times. “The past two years have seen the culmination of this process but also its acceleration.”

Inditex is far from alone in its digital drive, with companies across the planet speeding up their online efforts to cope with the pandemic. Some critics suggest that Inditex’s model, which still relies heavily on bricks-and-mortar retail, may struggle to keep up with digital-only outlets in the future. Others argue its brand of just-in-time fashion is inherently unsustainable, despite the efforts the group has made to reduce its environmental impact.

Yet Inditex’s integration of its stores and online operations stands out all the same. In some ways, today it is the central feature of the company, a group created and still controlled by Amancio Ortega, Spain’s richest man, as a vertically integrated business that puts a premium on speedy production and on customers’ preferences rather than managers’ preconceptions.

The group’s physical-online integration was made possible by a combination of factors: the tracking devices; a common database for the company’s entire stock, known as a single inventory system; and an in-house digital platform that accommodates almost all the group’s activities.

In many ways, the starting point is the tracking technology, known as radio-frequency identification, or RFID. The RFID devices, which contain miniature circuits and tiny antennas, are hidden in clothes’ security tags and are recyclable, which keeps down costs.

Even so, Inditex, which handles more than 1bn items of clothing a year, uses about 300m RFID devices. By keeping tabs on the location of all the company’s merchandise until it is in customers’ hands, the devices provide invaluable information to Inditex and allow the group’s 6,650 stores to act as mini-warehouses from which orders can be dispatched.

The devices transmit their location at various points in the life cycle of an Inditex skirt or jacket — from the factory, when batches are passed through metallic scanners ahead of being shipped, to stores’ back rooms and display areas, where staff carry out stock checks several times a day by waving electromagnetic wands at the garments.

The system was rolled out across Inditex’s network, which includes Zara stores but also brands such as Stradivarius and Pull&Bear, by the end of 2019. The timing proved crucial — when the pandemic closed 95 per cent of Inditex’s stores, as of April 2020, the single inventory system meant that shops’ stock could be used to fulfil a big increase in online sales, which last year rose from 14 to 32 per cent of Inditex’s group revenues.

The impact this year has also been considerable. In results reported in September, Inditex surpassed pre-pandemic revenues, profits and cash holdings — a milestone that rivals such as H&M have yet to attain. Between May and July, sales hit €6.99bn, 1.4 per cent above the previous high for the equivalent period, in 2019.

Analysts attribute the figures to resurgent consumer demand, a store optimisation programme that translates into fewer, bigger, more efficient outlets, and the single inventory system — which helped the group reduce stock by 4 per cent from 2019 levels, despite the increase in turnover. 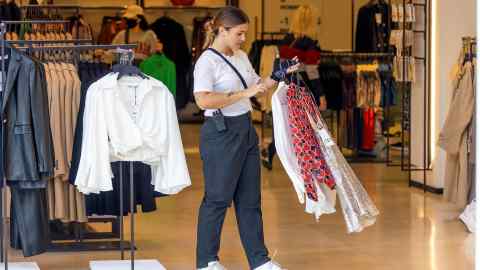 “Sales are ahead of where they were in real terms two years ago and I don’t think many retailers have reached that position at this point,” Anne Critchlow, an analyst at Société Générale, said of the September results.

Isla, who has headed the company since 2005, explains the importance of the revamped system. “The single inventory was vital in 2020, but it is key to our general approach; it offers our online customers not only what we hold in our online stockrooms but the product in the stores.

“During the season, there may be a product that is no longer on display in the store, because new collections have come in, or there isn’t the full range of sizes, but thanks to the single inventory system we can keep offering it to our online customers.

“This is very good from the point of view of customer services and very positive for the company in terms of gross margin, because it prolongs the life of the product and the possibility of selling it at full price.”

Inditex also tries to apply this integrated approach to the level of customer experience. Although there are national variations, within countries the group offers the same range of products online and in person, with customers sampling clothes in stores before buying them online, or vice versa.

Physical stores sometimes even ape the online display, showing a series of different looks next to each other, almost as if the consumer is flipping through them, rather a wall of the store being devoted to a specific collection.

And thanks to a system available in almost 500 locations in 21 countries — which the company calls “store mode” — shoppers can use the Zara app to track down which store holds a particular item of clothing and where in the store it can be found. The system is also being rolled out at the group’s other brands.

The sheer scope of Inditex’s needs makes hefty demands on the group’s data and computing resources, which the company says it meets through its IT architecture, the Inditex Open Platform. Executives liken this to an enormous digital building that houses different departments, from design to logistics to finance; operations in different countries and languages; and the data underlying the single inventory system.

It is also a relatively recent innovation. Over the past five years, as part of an €11bn investment programme, some 95 per cent of the group’s activities have been migrated from a third-party platform to the Inditex Open Platform.

The company says the process should be complete by next year and that it gives Inditex the ability to scale up its operations. “With our open platform we have up to 10 times more capacity in terms of numbers of transactions per minute,” says Isla, who argues that the platform allows Inditex to process sales much faster than rivals at peak sales times, such as Black Friday.

He adds that because of microservices — individual features or apps within the overall platform that accommodate different departments’ needs — the system can be tweaked easily to suit suppliers or start-up tech groups working with Inditex.

But Inditex, a company that often shies away from publicity, remains reticent about the broader significance of the road it has charted. “I will never say this,” says Isla, on being asked what lessons Inditex’s pandemic-era technological changes have for other businesses. “I talk about what’s mine, Inditex, what we are doing. I can’t give advice for other companies.”