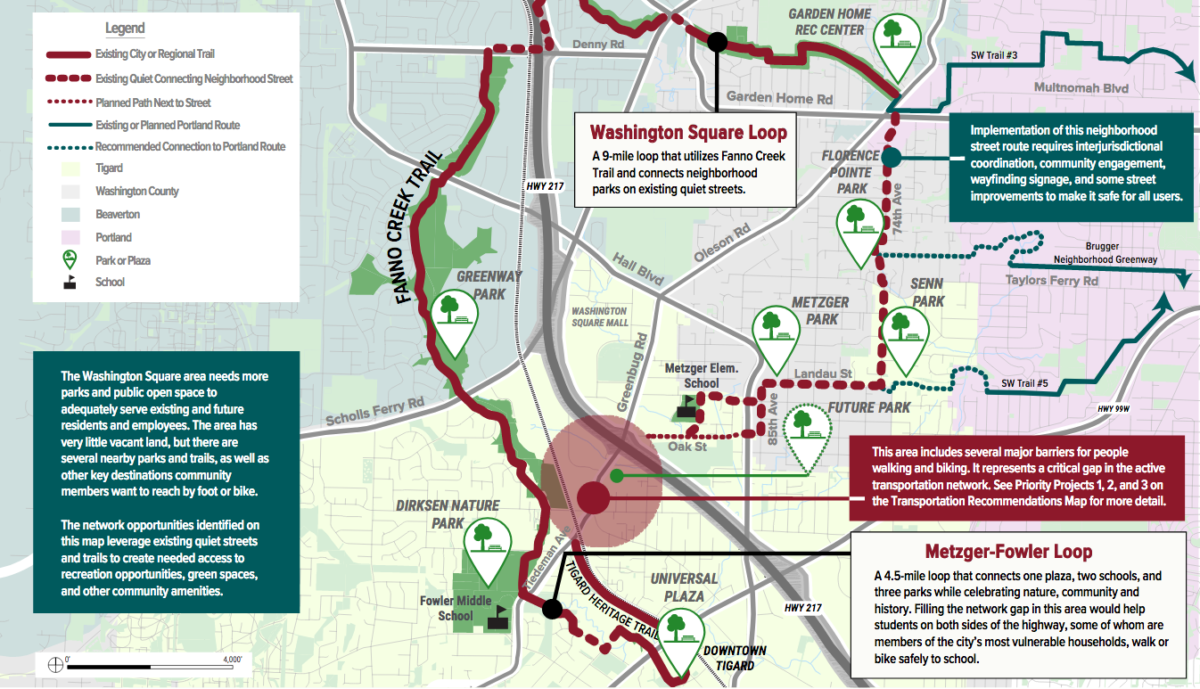 Over the next few weeks, The City of Tigard will review an ambitious redevelopment plan for the area around the Washington Square mall which they are calling the Washington Square Regional Center (WSRC). The Draft Final Report has a number of recommendations for improved active transportation, including:

– the Washington Square Loop, a nine-mile bike and walking facility which will leverage existing quiet streets and trails. 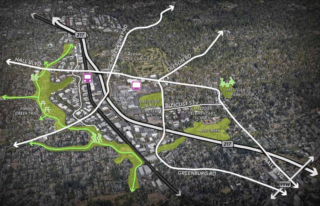 The first plan for the WSRC was drawn up in 1999 and “envisioned the area as a dense, walkable, and vibrant place with more housing options, better transit service, and more urban amenities.” But as the current project website goes on to concede, “the area has made slow progress towards that vision in the past two decades.” Currently, the region is given over to cars and strip malls. There is no lack of potential active transportation safety projects. Bike lanes have gaps, and the crossings are difficult. Many existing sidewalks are curb-tight along high-speed traffic and some places don’t have sidewalks at all.

However, with the growing climate and housing crises, and the continued blows to brick-and-mortar retail by e-commerce, the pandemic and staffing woes, there is new urgency to transform the area. (In related news, Portland’s iconic Lloyd Center Mall is currently foreclosure.)

(Photos of the mall by Lisa Caballero/BikePortland)

Central to the redevelopment is the mall itself, which is owned by Macerich, a publicly traded real estate investment company. Macerich seems poised to redefine what a shopping mall is, and their plan includes an “activated community plaza, 24/7 energy from hotel guests and residences, and unique entertainment.” This re-orienting away from big box stores and toward a smaller, more urban-feeling retail experience has been dubbed “experiential” retail. Tigard is betting that this good ol’ real estate buzz will create the synergy they need to attract other residential and commercial developers to the area. Along with zoning changes and transportation improvements, they hope the concentration of activity at the mall site will support development throughout the regional center. 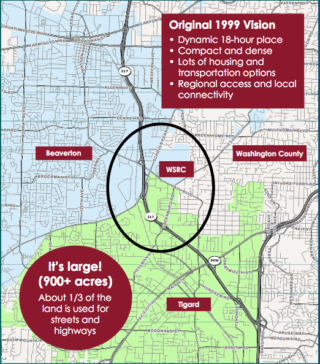 The SWRC is one of eight regional centers designated by Metro in its regional growth plan. It spans three different jurisdictions—the Cities of Tigard, Beaverton and unincorporated Washington county—and from the Washington Square mall it reaches out about a mile each direction to total 827 acres. The key land for redevelopment is in Tigard, and the shopping mall accounts for over a third of that area. Interestingly, roads also cover one third of the surface area.

The Draft Plan itself was very readable, and I appreciated that the documents were direct about discussing the challenges to realizing various aspects of the plan. In particular, the Executive Summary: Existing Conditions, Opportunities, and Needs was really informative. It was there I learned that most of the existing development in the WSRC was built before there were stormwater run-off regulations and that it doesn’t meet current stormwater standards. Redevelopment will trigger current stormwater requirements. The Non-vehicular Transportation Audit by consultants Toole Design was also an excellent run-down on the inadequate active transportation facilities in this auto-centric region.

Tigard’s Community Development Department recently released the Draft Final Report and it will go before their Planning Commission on November 15th and the City Council on December 14th for adoption of project recommendations.

Lisa Caballero has lived in SW Portland for 20 years. She is on the Transportation Committee of her neighborhood association, the Southwest Hills Residential League (SWHRL), and she is passionate about improving the active transportation infrastructure in southwest hills.